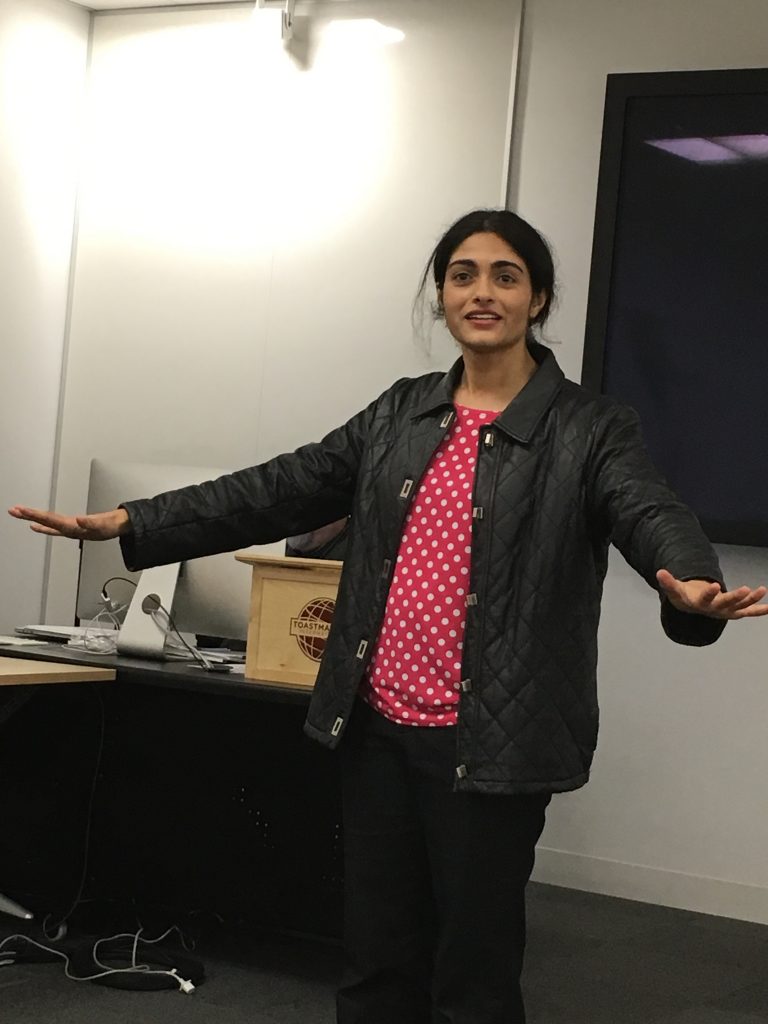 The International Speech Contest featured speakers presenting a five to seven-minute speech on a topic of their choosing. Kini bested other contestants with her speech, “Rock, Paper, Scissors” using the childhood game to draw comparisons to the role the media play in shaping perception of facts. “Scissors can cut away words and create new meaning. Some scissors are crooked, some are bent. Some cut to the left, some cut to the right,” she said.

Kini is one of the newer members of Macintalkers, having discovered the club last fall while working on the Apple campus. However, the Macintalkers Club is open to non-Apple employees as well.

Boorsma won the Table Topics contest, an impromptu speech contest in which speakers were given one to two minutes to respond to a question. For the club contest, all contestants were asked to “describe your first car” by the contest chair, Ed Dempsey.

Boorsma spoke of her Isuzu Sunsport, a “pregnant jelly bean” that she said was so light, her friends were able to band together and carry it across a parking lot.

Like international speech contestants, table topics contestants were evaluated by a panel of their peers on how well they perform on speech structure, effectiveness, content value, physical movement, vocal, manner, appropriateness and grammar.

The club level International Speech contest is the first step toward the World Championship of Public Speaking to be held in Vancouver, BC, Canada late this summer. The next level is the Area-level Contest, also to be held on the Apple Campus, on Wednesday, March 15.

Speech contests are a Toastmasters tradition. Each year thousands of Toastmasters compete in the Humorous, Evaluation, Tall Tales, Table Topics and International speech contests. Competition begins with club contests and winners continue competing through the area, division and district levels. The International competition has two additional levels — semifinal and the World Championship of Public Speaking®. Each year, more than 30,000 Toastmasters members compete in one or more of the these contests.

More photos from the contest can be found on our Facebook page at www.facebook.com/macintalkers