Limits you want to cross today?

What is one goal – big or small – that you had in your mind but you procrastinating?

Do you believe its beyond your physical limits? Lets understand how we can achieve it.

We have typically three blockers that work against us.

Takeru Kobayash six time winner of Nathan’s Famous Fourth of July International Hot Dog Eating Contest. in 2001, he was able to beat the previous record by margin 100% (25 hotdogs in 2000 vs 50 in 2001). How did he do it? By Unwillingness to accept limits or barriers that may not be worth honoring.

Ironman (http://www.ironman.com) – triathlon to test the human endurance – 2.5 miles swimming + 112 miles bike ride and full marathon.  Julie Moss – Ironman champion – was able to achieve even without complete training and incomplete food and a new comer to the race.

Strike a deal with yourself – “Does not matter if it hurts, if gets messy, I don’t care how it looks, I will finish.” your ego stops you, there is no limit to human capability.

Are there any limits since we are humans with finite resources? made of cells which have limited energy. May be but our minds stops us much before that because it keeps it for unexpected situations. Can we use this mind’s limits to our advantage? 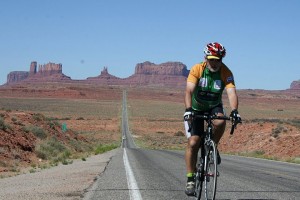 Lets talk about another race – Ride across America (http://www.raceacrossamerica.org) – Bike riding across america 3000 miles without sleeping or sleeping less than an hour a day.  Toughest race in the world.

People who have done this mentioned that after 5 days they hallucinations and their worst nightmares come alive. This fear brings out the stash of energy from the reserve and suddenly they get the boost.

So, by crossing our physical limits we can actually go beyond what we thought was humanly possible.

Lets push ourselves to cross first the limit of the mind and touch the limit of our body transform ourseleves.

In Takeru Kobayash words “the thing about human beings is that they make a limit in their mind of what their potential is. They decide, “I’ve been told this,” or “this is what society tells me,” or they’ve been made to believe something. If every human being actually threw away those thoughts and they actually did use that method of thinking [about] everything — the potential of human beings is great, it’s huge, compared to what they actually think of themselves.”

Lets do something that we have been holding off because we thought is beyond our limits.