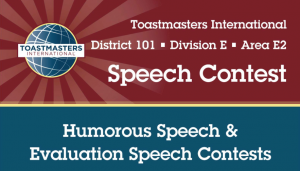 This August our club, the Macintalkers, had a humorous speech contest. I thought, hey I’m kind of humorous—often unintentionally—but still, I’m usually able to get laughs from my club members when I speak. So I took a speech I had given earlier this year about saying yes to new things, revised it and performed it at the club contest. To my surprise, I won. (You can read the speech transcript here.) My first thought was “Wow, I will post this on Facebook and get many likes!” My second thought was “Oh no, I will have to represent my club and compete in the area contest.”

The week before the contest, I did one more practice run in front of my club. It didn’t go very well. I flubbed my lines, looked at my notes, and my jokes missed their landing. So I decided I needed to slow down and rehearse it more.

The day of the speech contest, I arrived at the building and was immediately nervous. It was the biggest Toastmasters crowd I had ever performed in front of, and in an unfamiliar environment. There were maybe 70-80 people and they were all expecting to see good speeches. I was called into the contestant briefing room, where everyone else seemed extremely outgoing and hilarious—and there I was, just hilarious. While we were filling the questionnaires about what makes us interesting, one contestant mentioned how he had filled out so many of these before, he didn’t know what else he could write. I thought, I will just pretend I fit in here, that I am a confident, cool person like the rest of these contestants. You know that old phrase: Fake it ‘til you make it…or ‘til someone calls you out on it.

Then the competition started. Bobby, my fellow Macintalkers member, who was competing in the Evaluation Contest, did an excellent job. And I thought, OK, I cannot be the one to ruin the reputation of the Macintalkers.

Nish, the first contestant in the humorous speech contest, went up. He had poise. He had props. He had stage presence. He could do accents. Every movement and gesture seemed perfectly planned. The audience was captivated. And then my name was called. It was like being called to the dentist’s chair. I got in front of the crowd. I thought, I can’t sit down now. So I started my speech…And they laughed and laughed (with me, instead of at me, I think). I was addicted. I went to my next point. And my next point. And wow, these people were loving it! They were laughing much harder and longer than I had been accustomed to at the club level. I actually had to pause for a while before I launched my next joke. And I thrived off that energy. I normally stutter and stumble, but not tonight. Things flowed smoothly. Things were (mostly) polished. When I finally finished my speech, I thought, oh wow, I actually might have a chance to win this!

Well, it turns out, I didn’t win. But I was still proud of myself. I have come a long way from being the guy who would hold his notes in front of his face and avoid eye contact. Thanks, Toastmasters.